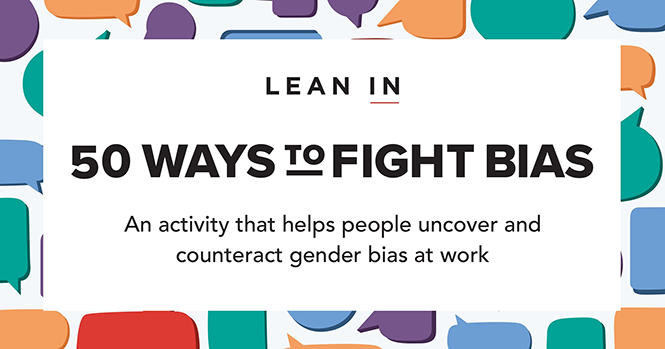 Every week, someone asks me (at least once) about a specific situation a woman has had in the workplace – usually on a sales team – either to get some advice, tell what happened, or simply to share in a safe space about an incident involving them or someone they know.

I’m happy to be a sounding board and while I have some solid opinions based on 30+ years in sales in male majority workplaces,  I’m aware that I don’t have all the answers.

It was great to see that Lean In came out with activity cards and short videos, 50 Ways to Fight Bias which highlights 50 specific examples of gender bias in the workplace. It also offers recommendations which are research-backed (and references the research) to help everyone better understand what to say or how to react when they see, hear, or say something in the workplace that seems inappropriate, biased, or just feels wrong. Check out the intro video for more information.

You can learn about five DIFFERENT types of gender bias (did you know there were 5 types?)

There are also women who can face double (or triple) discrimination due to race, age, a disability or other aspects of their identity in addition to identifying as female.

I will be talking about each form of gender bias in future posts.

Randomly pulling out cards from the deck, I found one very real situation –

“A woman suggests an idea in a meeting and it falls flat. A few minutes later, a mam suggests the SAME idea and gets an enthusiastic reaction” –

What to do – You can remind everyone that the idea originated with your woman colleague: “I think [NAME] made that point a few moments ago. I like this direction.” Advocating for women coworkers in this way can help them get noticed for their contributions – and it can also position you as a leader.

Because we tend to underestimate women’s performance and overestimate men’s, we often don’t give women as much credit for their ideas. This can play out in meetings. The team doesn’t “hear” an idea when a woman raises it, but when a man says the same thing, they pay attention. [Heilman and Hayes, “No Credit Where Credit is Due”]

That is just one of the fifty cards, above. Watch for more on this topic and in the meantime, check out the video referenced above, or buy the cards from LeanIn.org

Lori Richardson is President of Women Sales Pros and can be reached for speaking, consulting, and writing about more women in sales and sales leadership roles.  #WomenInSales