How Oprah Mastered Sales at a Young Age 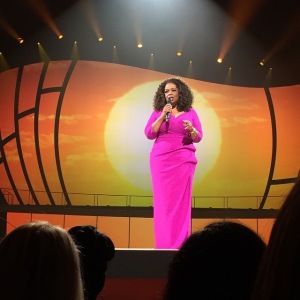 It was a treat to see Oprah Winfrey speak recently in my hometown of Seattle. I flew in from Boston specifically for this event. It only made sense since I had flown from Seattle to hear her speak in NYC about four years earlier.

If you can get a chance to see a masterful performer and presenter at work, you should go at all costs. That is my philosophy when it comes to seeing greats like Oprah or Tony Robbins or others who can earn the attention of an arena full of people. It is amazing to me as a speaker and an aspiring “performer.”

What was fantastic about this event, Oprah’s “The Life You Want” weekend, was that Oprah was there the entire time – with a speech on Friday evening that was riveting and with a number of guests the following day, including Elizabeth Gilbert. Elizabeth is the author of “Eat, Pray, Love” and was eloquent in her message.

My favorite story shared at this two-day event was when Oprah talked about her childhood. She lived with her grandmother when Oprah was 3 years old and her grandmother taught her to read. When Oprah was sent to be with her mom who lived in Milwaukee, she was put into the Kindergarten class. Oprah said she looked around and saw all these wooden blocks with letters on the ground and immediately realized she was not in the right class.

She wrote a letter to her teacher stating that she was in the wrong class, sharing that she knew many big words – such as Shadrach, Meshach, Abednego – and she threw in hippopotamus for good measure. The teacher sent her to the principal’s office where she had to write these out in front of him – which she did – and then got put into sixth grade.

Oprah was selling herself – at age six – and now as a media mogul and philanthropist, she continues with her OWN network and good works around the world.
The story she shared made me think about how we are so good at selling ourselves when we are small and how a whole chunk of the population grows up not being able to sell themselves when older. How do you fare in this? Can you sell buyers on what differentiates you from the competition? Can you sell your company on why you should be their next sales leader?

Lori Richardson is President of Sales Shebang®. She works with frontline sales reps and their managers in midmarket companies to improve prospecting and fill pipelines. Lori’s book, “Sales Gems” will be out in early 2015. Find her at www.ScoreMoreSales.com or @scoremoresales on Twitter.