Pay for Women in Sales on International Women’s Day 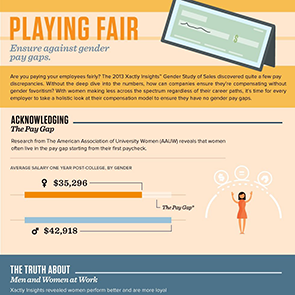 Over two years ago, Deborah Gage of The Wall Street Journal interviewed Chris Cabrera, CEO of Xactly Corp. in the article:  Big Data Company Shines a Light on the Dark World of Women’s Pay.  If you don’t have a WSJ subscription to view the 2014 article, I’ll summarize.    Using data captured by Xactly’s own software – that automatically collects, analyzes and calculates sales compensation – Xactly discovered that women employees in its own company received lower average commission rates than men.

With the ability to easily access this information, Xactly was empowered to make the appropriate changes and fix the gap.

Since then, other companies, such as Salesforce, have made great strides in showcasing this issue. At Dreamforce 2015, Salesforce devoted an entire day focused on workplace equality. Industry leaders, including YouTube CEO Susan Wojcicki, Stitch Fix CEO Katrina Lake and Salesforce CEO Marc Benioff, shared how they’re driving change within their own organizations.

I’ve mentioned many times in podcast and video interviews that a mistake I made early on was to not negotiate my salary as a sales rep – even though I later found (multiple times) that my male counterparts all negotiated theirs. Also understand if the commission and / or bonus structure you are receiving is comparable with others in your company and industry. It is a huge point I make when talking to women in business.

Of all the things we could focus on for International Women’s Day I think parity in compensation is a top issue.

Since 2014 many panels about women in sales have referenced the Xactly research – that women attain quota 3% higher than men, and also make less commission and salary on average – so I wanted to see what Xactly CEO Chris Cabrera had to say about the attention those stats have gotten. Chris shared with us:

“It’s been over two years since Xactly uncovered gender pay disparity within our company using our own compensation analytics – a situation we quickly fixed. Since then, I’ve definitely been encouraged by efforts in the industry to address pay disparity. As the father of a daughter who recently entered the workforce, it’s an issue important to me on both a personal and professional level.

On International Women’s Day this year, it’s vital for companies to continue to highlight all inequities in the workforce. These include salary, as well as opportunities for promotion and growth. I would add that women simultaneously must continue to be proactive in the management of their careers.

Knowledge is power. Having insight into compensation practices makes it easier for men and women to manage their own professional destinies and incites executive leadership to address imbalances.”

It is great to have men speaking up on the issue of pay disparity and taking steps to do things about it. Thanks, Chris, for the helping lead the way.

Lori Richardson is President of WOMEN Sales Pros and the author of the upcoming book, She Sells, She Leads to be released in 2017. Lori speaks to company leaders on 5 ways to get more women into sales and sales leadership roles. Visit the WOMEN Sales Pros blog and follow us on Twitter at WOMENSalesPros.